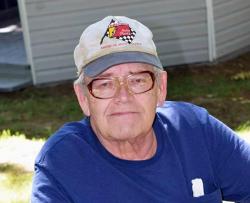 On July 2, 1977 he was united in marriage to Carolyn Sue Rose in Sullivan.

Bill was a lifetime Bowler, achieving two 300 games and an 800 series. He enjoyed hunting, fishing and playing pool.

He took pride in caring for his family especially his grandchildren.

Six-year-old Billy Roach inspired the Shriners fraternity to expand its health care mission to include children with burn injuries. Facing amputation of his leg, due to inadequate medical care following a burn injury, Billy and his family turned to the Shriners. The success of his ensuing treatment at a Shriners orthopedic hospital was highlighted two years later when Billy kicked a football into an audience of cheering and weeping Shriners at the 1962 convention. That very day the Shriners unanimously approved a resolution that led to the establishment of three Shriners Hospitals for the treatment of pediatric burns.

Bill was preceded in death by his parents, William L. and Alice Roach Sr.; one brother, Ronald Roach; one sister, April Voss and his father-in-law, Carl E. Rose.

A memorial service will be held at a later date. Visit www.midlawn.com for an online register book.

In lieu of flowers memorial donations to Shriners Hospital for children are preferred.