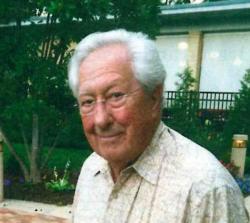 William B. Roosman was born June 24, 1929 in Bourbon, MO, and was raised on a large dairy farm run by his parents and grandparents. He attended high school in nearby Sullivan, MO, where he met his high-school sweetheart, Jean Shaffer. After four years of courting, Bill and Jean were married February 3, 1951 and have spent their lifetimes together.

After his army discharge, Bill returned to Missouri and he and Jean lived and worked in the St. Louis area for many years. Bill worked for various industries, including serving in technical positions for an industrial manufacturer and in later years, as a manufacturer's representative for wholesale leather and other raw materials for the shoe industry. As a leather representative, he had the good fortune to travel broadly, and was at the forefront of the fashion industry for many years.

Bill was a gifted inventor, and was a self-taught mechanical engineer. There was nothing that he couldn't figure out how to make or build himself, and over the years he created many beautiful items from wood and metal materials. In 1962, he formed manufacturing company that eventually grew to include a foundry, a machine shop, and a mold-making department. He held a patent for a specialized "high-line clamp", which increased the safety and efficiency by which electrical transmission wires are held to the electrical poles. The company was in business for over thirty years, and his daughter and son-in-law are still involved in high-tech manufacturing, using various technologies that Bill originally developed.

Since 1979, Bill lived in Farmington, MO in a home that he (of course!) built himself, along with the enthusiastic help of his family.

Bill has been an avid golfer for many years, and has enjoyed the game and the friendships that were a result of that passion. His home in Farmington was located on a golf course (St. Francois Country Club), and over the years many friends will recall him driving around in his bright red, Rolls-Royce golf cart. He also proudly served a term as President of the Club during the early 1980’s. Bill also loved to travel, and has enjoyed many golfing vacations to his favorite destinations.

Bill passed away Thursday, February 1, 2018 at the age of 88 years. Bill is survived by his wife, Jean (Shaffer) Roosman, his daughter, Ellen (Roosman) Mell, and his son-in­ law, Dennis Mell, who share their time between Farmington, MO and St. Louis. He is also survived by his grandson, Johnathan Mell, who is pursuing a PhD degree in Los Angeles, California. Bill, Jean, Dennis, Ellen and Johnathan, known as the “Family Five:’, have shared a remarkably close relationship and friendship, and are each grateful for every precious moment they’ve had together.

Bill is also survived by a large and wonderful extended family, including his sister, Helen Clonts, of Sullivan, MO and his brother and wife, George and Bonnie Roosman, of Farmington, MO, along with many nieces and nephews.

Bill was preceded in death by his parents, William Roosmann and Luella Bryan, and three siblings, Wilma Smale, Maxine Key, and Dorothy Long, all originally from the region near Sullivan, MO.