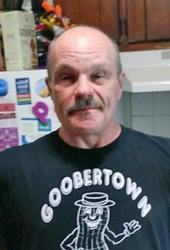 Tracy E. Powell, 48, of Cape Girardeau, MO, formerly of Sullivan, passed away on Thursday, February 8, 2018 at his home.

Tracy Evans was born on October 24, 1969 in Sullivan, MO to Johnny Powell and the late Gwenda (Bolin) Powell Burks. He grew up and attended Sullivan schools and received his GED in 1985. He married Cindy Thomen on June 25, 1988 and together they had two daughters, Jennifer and Sarah. Tracy served his country in the United States Army and was honorably discharged in 1990. For most of his life, Tracy worked laying floor. On June 25, 2014 he was married to Tammie Bauman. Tracy loved music and was gifted at playing guitar and piano. He had a big personality, loved people and would always help anyone in need.

Visitation was held from 1-3 p.m., Monday, at the Eaton Funeral Home in Sullivan.

All arrangements were under the care of the Eaton Funeral Home, Sullivan and Bourbon, MO.