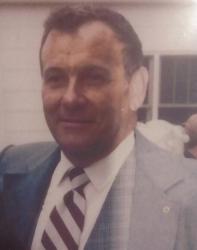 Stephen was born on July 15, 1931 in St. Louis, MO, the son of Stephen Platinum and Christina Henrietta (Ritter) Jannings. He lived parts of his childhood in St. Louis, but mostly grew up on the family farm in Lohmann, MO.

On January 26, 1955, Stephen was united in marriage to Evelyn Marie LaValle in St. Louis, MO, at the Messiah Lutheran Church, and to this union four children were born. He and Evelyn also served as a foster family and welcomed many young people into their home over the years. Stephen was a member of Cross Roads Baptist Church of Leasburg, MO, where he served as a trustee for several years.

As a young man, Stephen worked for McDonald Aircraft, served in the United States Air Force from 1951 to 1953, and then worked at the St. Louis Terminal Rail Road, the St. Louis Water Department, and eventually for the St. Louis Fire Department, where he enjoyed a 27-year career. After retiring from the fire department, he went to work for the City of Sullivan Parks Department for 11 years. He felt blessed to have had an opportunity to drive a steam locomotive when he was younger and to usher at Sportsman Park for the last game the St. Louis Browns played there. Stephen loved to spend time outdoors, gardening, with his family, and fishing, especially cat fishing at the family farm on the Moreau River and at Uncle Dean’s cabin on the Bourbeuse River.

He was preceded in death by his wife, Evelyn (Lavalle) Jannings; his parents, Stephen and Christina (Ritter) Jannings; and one sister, Audrey Scheperley.

Memorial contributions may be made to:  Crossroads Baptist Church, Leasburg, MO.