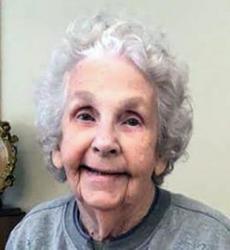 Mildred Audrey Reed was born on March 4, 1929, in St. Louis, MO, to the late William H. Reed and Ruth Dobbs. She attended Baden Elementary School and graduated from Beaumont High School, Class of 1947.  Mildred was united in marriage to Norman Leeker on May 15, 1949 at Holy Cross Church in Baden and they were blessed with six children, Norman, Michael, Jim, Stephen, Mark and Janet.  They lived in the city for a brief time before moving to Cedar Hill Lakes, and then Fenton, until 1967. At that time, they moved to Union, until Norman’s passing in 1972. Millie then moved to Bourbon and worked many years as a receptionist for Dr. Giem. Millie was an active member of Seventh Day Adventist Church.  She enjoyed singing and playing the piano and organ at church. Millie also liked jigsaw puzzles, sewing and embroidery and reading. She will be missed dearly by her loved ones and friends.

Visitation was held from 10 a.m. to 12 p.m., Thursday, at Seventh-day Adventist Church.

Memorials contributions, in memory of Mildred, may be given to the Seventh Day Adventist Church in Sullivan or the Missouri Veterans Home in St. James, MO.

All arrangements were under the care of the Eaton Funeral Home of Sullivan & Bourbon, MO.