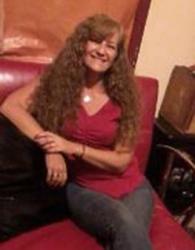 Melissa was preceded in death by her mother, Freeda Dodd; by her sister, Angela Dodd; and by her soulmate, Elmer “Bud” Cox.

Melissa was a Christian, having been raised in the Baptist faith and believing in the Lord as her Savior. As a young woman she worked as a waitress at Coach’s Restaurant in St. Clair, MO and later went on to teach pre-school at Holy Trinity Day Care in St. Clair for many years.

While her children were in school she was a room mother and also had slumber parties at her home for the girls. Melissa loved the outdoors and enjoyed going camping and on float trips. She also had a passion for reading and writing, often sharing her own poetry with loved ones. What meant most to her, though, was time spent with her family. Her children and grandchildren held a very special place in her heart, as she did in theirs. The memories they created will never be forgotten. A kind and loving mother, foster mother, grammy, daughter, sister, sister-in-law, aunt, great-aunt, cousin and treasured friend, she will be sadly missed and lovingly remembered by all who knew and loved her. Memorials and donations may be made to the family in care of the Russell Colonial Funeral Home in St. Clair, MO.