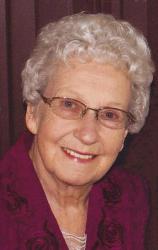 Mabel Louise was born on April 10, 1932 in Scotia, MO, the daughter of Earl and Tennie Ennis. She grew up and attended school in Scotia.  Mabel was united in marriage to Adolph Beckett on August 10, 1951, and to this union, three children were born, Tom, Joe, and Lisa.  They moved to Bourbon, where they began to raise their family.  Mabel worked at Paramount Apparel for many years.  Her husband, Adolph, preceded her in death in 1988.  Mabel retired from Paramount in 1994. She loved raising and breeding various dogs for Grammy B’s Kennel.  Mabel also raised chickens and peacocks and loved her flowers, she was especially fond of her roses.

She was preceded in death by her husband, Adolph Beckett; a son, Tom Beckett; her parents, Earl and Tennie Marie (King) Ennis; and two sisters, Edna Downing and Eileen Bryan.

Memorial Contributions may be made to Full Gospel Assembly of God in Sullivan.

Friends may send online condolences to Mabel’s family at www.eatonfuneralhome.com.