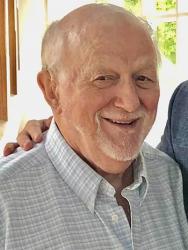 Edwin Larence known as “Larry” was born on February 23, 1940 in Bourbon, Missouri to the late Roy Edward and Edith Marie (Bacon) Tiefenbrunn.  He attended and graduated from Sullivan High School class of 1958. Larry attended college at Southwest Missouri State and had worked on a Masters’ Degree. He was united in marriage to Mary Ann Palmer on June 17, 1961. Mary Ann passed June 12, 1974 while giving birth to their baby son, Scott who passed along with his mother.

Larry was employed at St. Clair High School, and taught business classes. He later worked in the accounting department at Meramec Electrical Products from 1989 until he retired in 2007.

Larry was described as gentle but tough. He lived every day to the fullest and was a get up and do kind of guy. He had many different personas’ and names including; Larry Walnut, he planted hundreds of Walnut trees in various places, Red Rack Raider, and Great Chief Mow-Mow leveler of the plains, he who rides the deer.  He even had a special head-dress to commemorate this particular identity. Larry had a great-sense of humor, was a real clown and was an impersonator.

The most important thing in the world for Larry was his family, he adored his grandchildren and spending time with them. He hosted deer camp, fall bonfires, and his favorite, Christmas. Larry always made the Christmas holiday special and was known for leaving his Christmas lights up all year round and turning them on in July for the grandkids.  Larry was very special man, a wonderful Dad and Grandpa.

Larry was preceded in death by his wife, Mary Ann; two children in infancy, Sue and Scott; his parents, Roy and Marie Tiefenbrunn; and three brothers, DanielTiefenbrunn, Glen Tiefenbrunn and David Tiefenbrunn in infancy.

Cremation services have taken place. There will be a private family burial of cremains. A Memorial Service will take place at a later date.

All arrangements were under the care of the Eaton Funeral Home in Sullivan, MO.