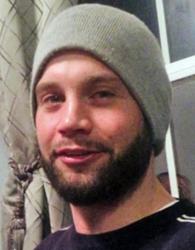 Joseph David Kamm was born on February 10, 1988 in Mankato, MN, the son of David Kamm and Amy (Plaisance) Griffin. Joe attended Mankato Area Catholic Schools and graduated from Mankato West. Joe lived a large portion of his life on the Judson Bottom Road on the Minnesota River. He had many hobbies growing up, including, skateboarding, snowboarding, and fishing. His Grandfather, Elden, had a great influence on his love of fishing adventures. They would spend many hours on the river, where he learned everything he could about fishing.

As he grew, his love for the outdoors continued. If the sun was up, you could find him on the river in a kayak with a pole in his hand. Joe wanted to start a new chapter in his life, so he moved to Missouri, with his mother, where he once again found a larger river. He gave himself the title “master of my kayak” and never let a lurer go, even if he had to climb a tree to recover it. These were his happiest times. Joe was also a mechanic of sorts, he always felt the need to take things apart and “make it better.” Joseph had an amazing personality that would make anyone smile. He will forever be lovingly remembered and missed by his family and friends.

He was preceded in death by his grandfather, Elden Kamm; and grandmother, Sunny Plaisance.

Joseph’s cremains were then taken back home, to Minnesota, where a visitation was held from 9 a.m. to 10:30 a.m., Saturday, March 9, 2019 at the Minnesota Valley Funeral Home, New Ulm, MN, followed by a Christian Service at 11 a.m. at New Ulm Cathedral, New Ulm, MN.

Friends may send online condolences to the Joseph Kamm’s family at www.eatonfuneralhome.com.

Arrangements are under the care of the Eaton Funeral Home of Sullivan & Bourbon, MO.