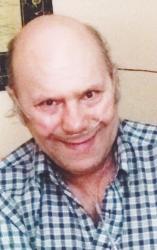 Joseph was born January 28, 1956 in Koszeg, Hungary, the son of Joseph and Elizabeth (Bata) Csonka. He grew up and attended school in St. Louis and went to work as a young man. Among some of his first jobs included being a Gas Station Attendant and Dry Cleaning. For many years, Joseph worked in St. Louis as a Custodian for several local restaurants. He loved his job with Metro Sweep most of all. He spent most of his life living in Fenton and Sullivan. Joseph had many dogs through the years and he loved each of them. He also loved watching westerns and collecting swords and Indian artifacts. Joseph will be missed by his family and friends.

He was preceded in death by his father, Joseph Csonka; stepfather, John Hall; and one brother-in-law, Robert Sederes.

Visitation was held 10 a.m. to 12 p.m., Thursday, prior to the funeral service at Eaton Funeral Home.

Memorial contributions will be given to a charity of the family’s choice.

Friends may send online condolences to Joseph’s family at www.eatonfuneralhome.com.