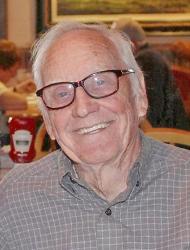 Jimmie Joe “Jim” Abel, 87, was the fifth of eight children born to Glen Ernest Abel and Stella Gray (Hubbard) Abel. He was born April 27, 1932 in Bolivar, Missouri, and died December 12, 2019. He graduated from Bolivar High School with the class of 1950. He also spent two years at Southwest Baptist College in Bolivar and received a Bachelor’s degree from William Jewell College in Liberty, Missouri. He went on to receive a Master’s degree in Natural Science from the University of Northern Iowa in 1967. He taught in a variety of settings in Missouri, Arizona, Iowa and Arkansas. His first teaching assignment was in a one room school at Old Argo, Missouri, where his duties extended to include those of custodian and bus driver.

At the age of 14 he dedicated his life to Christ and lived a life of service in subsequent years. As a high school Senior, he was stricken with a kidney disease which was declared incurable. He credits the prayers of the Bolivar church for his recovery. He served as a bi vocational pastor at Spring Bluff Baptist, Duly Baptist in St. Clair and New Friendship, Gerald, MO as well as churches in Arizona and Arkansas. He was active in the local church wherever his teaching jobs took him. He was part of the Franklin County Building Team and took part in the construction of many handicap ramps for the disabled in the area.

His interests were many and varied. He was adept at learning languages. He served in Japan during the Korean Conflict. While there, he was befriended by young Japanese Christians who gave him an appreciation of the culture and language of Japan. While teaching in Arizona, he taught many of Spanish descent and gained a working knowledge of their language. He was trained in the German language and did some translating of obituaries for the Germans from Russia Heritage Society. He especially enjoyed gardening and was pleased that his over-abundance of yield could be shared with friends and neighbors.

Jim was a member of First Baptist Church in Sullivan.

He was preceded in death by his parents; brothers and sisters, Viva Quick, Paul Abel, John Abel, Glenda Wilcox-Harvey, Ernie Abel and Lily Blankenship; and one great-grandson, Hayden Mesger.

Memorial contributions, in Jim’s memory, may be made to: First Baptist Church of Sullivan, MO.

It was Jim’s desire to be cremated. A Memorial Service will be held at 11 a.m., Saturday, December 28, 2019 at First Baptist Church in Sullivan, with Pastor Chester Lahmann officiating.

The Abel family will receive friends from 10 a.m. to 11 a.m., Saturday, at First Baptist Church in Sullivan.