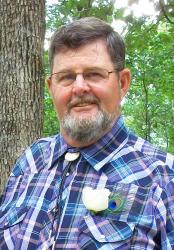 On Sep. 25, 1995, Rick was united in marriage to Julie Ann Hill (Kralik) in Union, Missouri. They settled in Beaufort, Missouri, where together they combined and continued to raise their family.

During their early marriage, Rick continued to grow his company, Total Security. In his free time, Rick enjoyed horseback riding, fishing, hunting, four wheeling but mostly spending time with his family and friends. Rick’s love of the lake and fishing led to the family’s relocation to Stockton, Missouri in 2003. There Rick found joy in lawn care, boating, retirement, and his nine grandchildren.

Rick also had compassion for animals and on several occasions was known to bring them home unannounced. Several dogs and cats, not to mention, horses, chickens, rabbits… and a few other furry critters along the way were given a second chance.