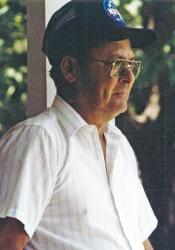 Ed was born in Nowata, OK, the son of Walter and Odessa (Southerland) Miller. He grew up in Nowata and also attended school there. Ed honorably served his country in the United States Army from March 1960 to April 1962. He was united in marriage to Lydia Jaramillo on October 26, 1963 in Grants, NM. Ed and Lydia were blessed with three daughters:  Sharon, Lisa and Mary Beth.

Ed was employed in the uranium mines in New Mexico. He then moved his family to Oklahoma, where he was self-employed in the oil fields. Ed and Lydia finally made their home in Sullivan, where Ed was employed by Pea Ridge Mine. Prior to retiring in 1999, Ed worked as a welder building the Callaway Nuclear Plant.

Ed was a master gardener and enjoyed fishing, playing cards, making memories with his grandchildren and spending time with his buddies at the V.F.W. and Eagles Halls.

He was preceded in death by his daughter, Lisa Van Leer; and his parents, Walter and Odessa Miller.

Private family services were conducted Tuesday, May 12, 2020 at the Eaton Funeral Home in Sullivan, MO.

Friends may send online condolences to the Miller family at www.eatonfuneralhome.com.