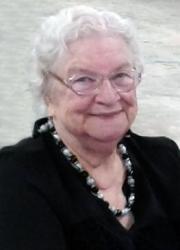 Rovene was born in Canton, MO, on February 27, 1937, to the late Roland and Pauline (Kutcher) Pearl. She was united in marriage to Robert Harrison Lockhart, Sr. on March 11, 1960, in Canton, MO. They moved to Leasburg in 1962. Rovene was employed as an Inspector with Ramsey Corp for many years, first in Sullivan and later in Manchester. She retired in 2007.

Rovene was a member of First Southern Baptist Church of Leasburg.  She taught Sunday School for many years and was also a member of the local Community Club in Leasburg. She enjoyed sewing and jewelry making. Rovene adored her grandchildren and great-grandchildren. Wherever she went, one or several grandkids could be seen with her. Rovene had a unique personality and a wonderful laugh. She could set you straight with just one look. She lived life to the fullest and enjoyed time spent with her beloved family.

She was preceded in death by her husband, Robert Harrison Lockhart, Sr.; one granddaughter, Andrea Lockhart; two brothers, Jim and George Pearl.

Visitation will be held from 10 a.m. to 12 Noon, Wednesday, prior to the services at First Southern Baptist Church of Leasburg.

Memorial contributions in Rovene’s memory may be made to First Southern Baptist Church of Leasburg.

Friends may send online condolences to Rovene’s family at www.eatonfuneralhome.com.