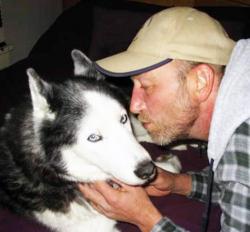 Donn R. Eckard, 57, passed away January 27, 2020 with his loving wife of twenty-two and a half years Michelle; and his family by his side.

Donn was born in San Diego, CA on February 10, 1962 and moved to Ballwin MO, with his family in 1966. He attended Lafayette High School in Ellisville.

Donn and Michelle fell in love in 1991 and were wed August 16, 1997. Donn was a kind, thoughtful, funny, smart, big-hearted man who made friends easily and was always there for friends and family who called on him. He was a skilled Carpenter, a perfectionist in his craft. He was the owner of Affordable Remodeling. He loved to create and enjoy his craft and his customers. Donn had a love for animals, especially for his beloved husky Ozzy and his cat TC. His love for music was shared by his wife Michelle and one of his favorite things to do was attend many concerts of their favorite bands.

He is preceded in death by his father John Eckard, Sr. and his grandfather Henry Ruegg.

He was a an awesome husband, son, brother and uncle.

A celebration of Donn’s life will be held at a later date.

In lieu of flowers, please consider donating to The Endangered Wolf Center; The Bird Sanctuary and Halo for Animals in Sullivan, MO.