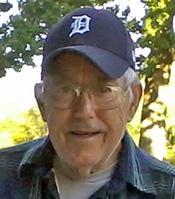 Don was born on July 22, 1939 to Donald and Estelle (Easter) Sumpter, in Bonne Terre, MO. He was married to Mary Lou Alfred for over 20 years. He was employed by MFCO and retired from there. Don was a life member of B.A.S.S. and member of North American Fishing Club. He was also a 30-year member of a Michigan Moose Lodge.

It was Mr. Sumpter’s wish to be cremated. No services will be held.