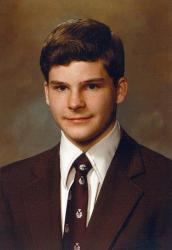 David Lee was born in Sullivan, MO, on September 6, 1967, to Donald Paul and Carol Ann (Lindner) Roberts. He attended and graduated from Sullivan High School, class of 1986. David was united in marriage to Alva Marie Wegescheide on October 24, 1998, and they were blessed with three children, Austin, Lauren and Debra. David loved his wife and children with all his heart. David was recently baptized in the name of the Lord Jesus Christ. He was employed for 26 years as a truck driver for St. Louis Paving. He was also a car and truck enthusiast, his 1968 Chevelle being his favorite.

David is survived by his three children: Austin, Lauren and Debra Roberts, all of Valley Park, MO; his previous wife, Alva Roberts of Valley Park, MO; his parents, Donald and Carol Roberts of Sullivan, MO; one brother, Douglas Roberts and wife Juanita of Floyds Knobs, IN; one sister, Susan Sharp and husband Alan of Sullivan, MO; and nieces, nephews, other relatives and many friends.

Visitation was held from 10 a.m. to 12 p.m., Saturday, prior to the funeral service.

Friends may send online condolences to David’s family at www.eatonfuneralhome.com.

Memorial contributions in David’s name may be made to: Voice of God Recordings, P.O. Box 950, Jeffersonville, IN, 47131. Online donations can be made at www.branham.org/en/payments (in the notes you can say that it is in memory of David Roberts).