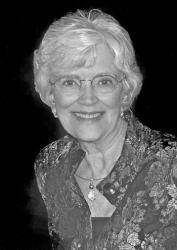 Darlene was born October 26, 1928, in St. Louis, the daughter of Grover Cleveland Warder and Gertrude Roach Warder. She lived and was raised in Bourbon, MO. Her father, whom Darlene adored, named her Darlene because she was his “darling”. Her father passed away during the depression when she was nine years old. Her mother bought the local tavern in Bourbon and Darlene helped her mother in the kitchen, flipping hamburgers and peeling potatoes.

While Darlene was 14 years old and a sophomore at Bourbon High School, she met a handsome senior from Sullivan, MO by the name of Bob George. That began one of the great romances of all time. Bob left to enlist in the Marines and fight in WWII, and while he was gone Darlene graduated from Bourbon High School with the class of 1946. She then went to Rubicum Business School in St. Louis and graduated in 1947. She then became an executive secretary at Mallinckrodt Pharmaceuticals Company in St. Louis.

When Bob returned, Darlene and he were married on June 4, 1949, and they moved to Sullivan where Bob began his career in the car business. Darlene began her time as a devoted and loving wife and the best mother ever to four children.

She is survived by all four, Steve and wife Jan, of Mexico; Jane Johnson and husband Mark, of Ft. Collins, CO; Mike and wife Kelly, of Woodbury, MN.; and Mary Sands and husband David, of  Mt. Zion, IL.

The family moved to Mexico in 1970 when Bob purchased a local GM dealership. Darlene was a member of St. John’s Lutheran Church, the local Mexico Women’s Club, several bridge clubs, P.T.A., and Bible classes at her church.

After all the children moved out on their own, Darlene worked in the office of the car dealership. After Bob retired and started a second career as a real estate agent with Century 21 in Mexico, Darlene also obtained her real estate agent's license at the age of 64.

Darlene and Bob were very happily married 56 years. He preceded her in death on Oct. 4, 2005. After Bob passed away she worked part time for several years at her son Steve’s Edward Jones office .

Darlene loved her family, loved her many good friends, and loved her Lord Jesus Christ.

Memorial services was held at 12:30 p.m. on Saturday, Dec. 14, 2019, at St. John’s Lutheran Church in Mexico. Visitation was from 11:30 a.m. until service time at the church. Friends and family are invited to a luncheon following the service in fellowship hall. Pickering Funeral Home is in charge of the arrangements.

Memorial contributions may be made to St. John’s Lutheran Church or to Mexico Area YMCA. They may be sent in care of Pickering Funeral Home, 403 N. Western, Mexico, MO 65265.

Expressions of sympathy may be given at pickeringfh.com