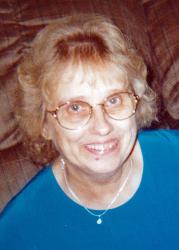 Connie Mae was born on January 25, 1944 in Oak Hill, MO, to the late William Dotson and Mary Pyatt. She grew up and attended school at Oak Hill.  Connie was united in marriage to Dale Smith on February 1, 1964 in Cuba, MO and they were blessed with four children:  Wes, Terry, Dale and Teresa.

After living in various places, the family settled in Leasburg, MO. She worked as an inspector at Meramec Shoe for many years and retired in 2007. Connie married Alick Combs on June 11, 2011 in Cuba, MO. In her free time, she enjoyed fishing, canning and cooking, family gatherings and BBQ’s.

Connie was preceded in death by her husband, Dale Smith; her parents, William and Mary Dotson; one brother, Darrell Dotson; and one great-granddaughter, Maddison Marie Voisey.

Funeral services were conducted 12 p.m., Friday, September 7, 2018 at the Eaton Funeral Home in Sullivan with Reverend John Ripley as the officiant. Interment followed in Bourbon Cemetery.

Visitation was held from 10 a.m. to 12 p.m., Friday, at Eaton Funeral Home in Sullivan.

Friends may send online condolences to the family of Mrs. Combs at www.eatonfuneralhome.com.

All arrangements were under the care of Eaton Funeral Home of Sullivan and Bourbon, MO.