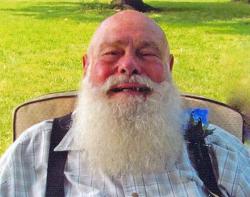 Clyde was born on his family’s farm in Japan, MO on July 14, 1941 to Otto and Mamie (nee Hines) Ruwwe. He attended Old Argo Grade school and Sullivan High School. Clyde began as a truck driver early in life before beginning his 40-year employment at Bull Moose Tube. He continued driving across the country until retiring in 2002. Clyde was united in marriage to Patricia Benton on November 29, 1975 at Old Argo Presbyterian Church and they were blessed with three sons over the course of their 42-year marriage. Clyde enjoyed hunting, fishing and drag racing. He will be missed by his family and many friends.