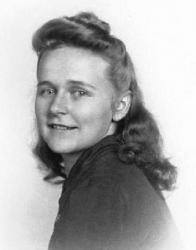 Carmelleet Virginia Pennock, 95, of Eldon, Missouri passed away on Saturday, June 13, 2020 at Eldon Nursing and Rehab in Eldon, Missouri.  She was born December 14, 1924 in the Black Jack community near Steelville, Missouri.  She was the daughter of the late William Esmar and Pearl Nevada (Hatcher) Hendrix.  On July 17, 1943 in Salina, Kansas she was united in marriage to Zane G. Pennock who preceded her in death on September 30, 2014.

Graveside Services were held on Wednesday, June 17, 2020 at 11 a.m. at the Eldon City Cemetery with Brother Bob Hoskins officiating.

Memorials in her name are suggested In Care of the Family.

Arrangements are under the direction and care of Phillips Funeral Home of Eldon, MO.