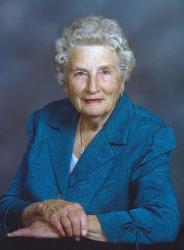 Berniece Loretta Voss was born in Forest Park, IL, on March 15, 1928, to the late Rudolph Carl and Bertha (Bertels) Voss. When she was just a young girl, Berniece and her family moved to the Spring Creek area, during the Depression. She grew up and attended Long Ridge School and graduated from Sullivan High School, Class of 1946. Berniece was united in marriage to Carl F. Brendel on June 7, 1947 at St. Anthony Catholic Church. Both of their families were very involved at St. Anthony’s Church. Carl and Berniece were blessed with ten children. Together, they raised their children near Leslie. Berniece worked as a cook for local schools for many years. She eventually retired from Spring Bluff School, then headed up the catering for the Knights of Columbus Ladies Auxiliary. They also catered many local events over the years.

Berniece was a devoted member of St. Anthony Catholic Church. She was well known for cooking, baking, quilting and her embroidery. She was well loved by her many grandchildren and great-grandchildren. Berniece leaves behind an amazing family legacy.

She was preceded in death

by her husband, Carl; her parents, Rudolph and Bertha Voss; a brother, Rudolph Voss; three grandchildren and one great grandchild.