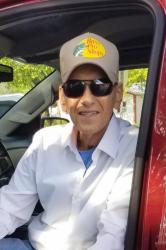 Amos E. Payne, age 65, of Bourbon, Missouri passed away Sunday, December 8, 2019 at his home, surrounded by his family.

Amos Eugene was born on May 4, 1954 in Bourbon, MO, the son of Gene and Ruby (Medley) Payne. Amos was raised in Salem and attended school there. As a young man, he was employed by Townsend Tree Service. Amos later started his own car detailing business, D&A Detailing, and ran it for 30 plus years. He was united in marriage to Deborah Ann Aubuchon on July 2, 1977 and three children were born to their union, Amy, Mark and Megan.

Amos was a family man and loved his granddaughters dearly. He always looked forward to family trips to Branson. Amos was an avid outdoorsman and enjoyed caring for his yard, which he kept in immaculate condition. He was also a “car man” and enjoyed restoring old cars, attending car shows and swap meets. Amos and Debbie attended New Testament Baptist Church in Sullivan, MO.

He was preceded in death by his son, Mark Allen Payne; his parents, Gene and Ruby (Medley) Payne; and his mother and father-in-law, Herbert and Marilyn Aubuchon.

Memorial contributions in memory of Amos may be made to the Payne family.