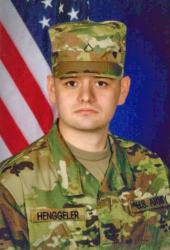 I would like to THANK all the people for the kindness shown my son, Pvt. Joseph Henggeler, last Thursday, July 25 when we pulled in for a takeout order at the Jack-in-the-Box restaurant. His mother and I had just picked him up from Fort Leonard Wood, where he had completed five months of Boot Camp.

On handing my credit card to the lady at their counter, she said "It's already been paid for you" pointing to a lady on the side. "No, not for me," I replied to her, and pointed over to my uniform-decked son filling up at the soda fountain, "it  was for him." I then waived and thanked our unknown gracious benefactor, who smiled and took off.

I then returned to our truck and sat as Joseph waited to bring out the order.  When he emerged shortly, he had an even bigger smile on his face! "What?" I asked. He said that while standing at the counter for our order, a separate little  girl walked up to him, looked up and said “THANK YOU for your service!”

I could tell he was touched.  Well, I was, too, and thank you to the whole town of Sullivan, Jack­-in-the-Box, kind lady, and sweet girl!