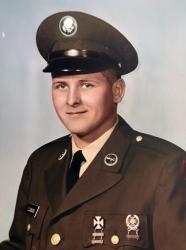 Fifty years ago, on January 23, 1968, the USS Pueblo was attacked and captured by North Korean forces and is known today as the “Pueblo Incident or the “pueblo Crisis.“

The ship was taken along with 83 crew members, one of whom was killed in the attack. The abuse and torture of it’s crew lasted about a year but the USS Pueblo is still being held captive by North Korea to this day and is being used as a museum ship.

At the time of this historical incident David "Snork" Clemens' unit was stationed at a base camp located north of Seoul, at the southern edge of the KoreanDemilitarized Zone or DMZ.

Snork, a Minnesota transplant, was drafted into the military in 1966 where he completed basic training and advanced infantry training at Ft. Carson in Colorado. Six months later, he shipped out to Korea and by October of 1967, was sent to the DMZ until Christmas break in December.

His job there was to man the "sweeps" looking for North Koreans hiding in the DMZ. Sweeps were made every day and usually took most of the day to perform. Soldiers were dropped off at one point then APCs were taken to another point where soldiers would come out. Setting up the APCs at the end point was called a "Blocking Force." SPC 4 Clemens was in charge of setting up the blocking force.

Clemens' unit also had their turns at guarding Libby bridge on the Imjin River. The soldiers were told that this bridge would be blown up if war were to break out, in order to keep the north from moving south. This bridge was guarded around the clock and it was told that North Koreans, stealing down south through the DMZ in the winter, would bring white sheets and cross the river when it was frozen over. There were 27 North Koreans that got through the American sector during the time Snork was there.

In mid-January of 1968, the North Koreans made a failed attack on the South Korean President's life and on January 23, the USS Pueblo was captured. Snork's unit was sent back to the DMZ.

He came back home in May of that year. After a 45 day leave, having taken in some fun with his girlfriend Betty, Snork reported to Ft. Hood. While in Texas, he was placed in the Armored Division and he served in the Headquarters Company. His job was to order and pick up or deliver rations for the mess hall. The mess hall was awarded best food award in which Snork was instrumental.

He was honorably discharged on October 3, 1968 and was married to Betty, the woman who had waited for his return, on November 23, 1968.

Although Snork was drafted into the service and didn’t really want to go, he’s proud now that he served his country for those two years.