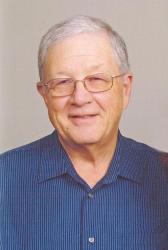 Ron was born May 17, 1948, the son of George Edwin McKay and Virginia Elizabeth McKay (Marsh). He graduated from Sullivan High School, class of 1966.  Ron began his working career at Ramsey in Sullivan, MO.  He was drafted into the United States Army on September 25, 1969 and served our country proudly during the Vietnam War. After his military service, he completed his Bachelor’s Degree from the University of MO-Columbia and became the Sullivan High School Vocational Agriculture teacher.  He was married to Juanita Joyce Lueken on August 30, 1975 and they were blessed with two daughters: Amanda and Leslie. He later worked for the MFA Fertilizer Plant in St. Clair, MO and lastly began a career at the Sullivan Post Office as a postal clerk where he retired in 2010 after 25 years of service.

Ron was a great man of faith who came to know Jesus as his Lord and Savior at a young age and as a public profession of his faith was baptized on April 28, 1959 at First Baptist Church, Sullivan, MO. Ron was a lifelong member of First Baptist Church where he loved and served the Lord through his church.  He served on several committees with his focus on missions, building funds, and building maintenance.

He enjoyed all things outdoors. He loved watching and feeding his deer in the field, hunting for that 10-point buck, cutting down trees, clearing brush, keeping an immaculate yard, and gardening. He loved spending time with his wife and daughters traveling the world and completing little projects for them. His wife and girls were his world. He will be greatly missed by all who knew him.

Memorial contributions in Ron’s name may be made to the First Baptist Church of Sullivan Building Fund.