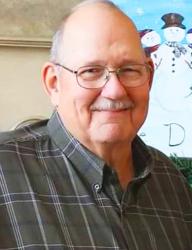 Robert James Dierking was born on Dec. 10, 1947 to George and Elise Christine (Schebaum) Dierking at the family homestead in Japan, MO. He grew up and attended country schools in both Seminary and Japan, later graduating from Sullivan High School, Class of 1965. As a young man, he went to work for Ramsey Corporation. Shortly after, he married the love of his life, Kathy Loless, on July 3, 1976 at First Assembly of God in Sullivan. To this union two children were born, Chrissie and David. Together, they raised their family in Sullivan and were dedicated and active members of the First Assembly of God Church in Sullivan for over 25 years. They then moved on to serve in other areas of ministry in both Missouri and Ohio, the latest being First Assembly Church in Saint Peters, MO.

Bob retired from Ramsey/Dana Corp in 2006 due to health reasons. He had overcome multiple illnesses and accidents in his life with sheer strength, determination and unwavering trust in the Lord. No matter where he was, he was a faithful servant and was always willing to help wherever the need may be.

Through the years, Bob enjoyed hunting, fishing, and especially loved gas engines. Up until his passing, he was still actively serving Vice President of the Illinois Missouri Tractor and Engine Club.

He was preceded in death by his parents, George and Elise Dierking; a brother, Eldo Dierking; and two aunts, Mary Kay Chapel and Mattie Knopfel.

A Private burial was held at Crow Cemetery in Sullivan. A memorial service will be held at a later date.

Friends can send online condolences to Bob’s family at www.eatonfuneralhome.com.