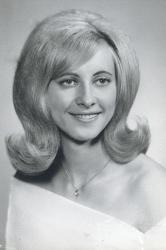 Neoma Parker Cross, age 70, of Sullivan, MO, passed away on Thursday, May 3, 2018 at Missouri Baptist Hospital in St. Louis.

Neoma was born in Sullivan, MO, on November 15, 1947, to the most wonderful, hardworking parents, William and Gladine (Dilks) Parker. She was saved in Christ in 1966. Neoma was raised in the Spring Bluff and Sullivan area. In 1970, she met the love of her life, James E. Cross, and they were married on August 8, 1970. Neoma always wanted to be a wife and mother and was blessed with three children: Jim, Misty and Amanda, who in turn gave her the precious gift of becoming a grandmother to: Benjamin, Andrew, Olivia, Sierra, John, Tucker and Maggie. She was also known to take in and cook for anyone else’s children who came to her home. Neoma also enjoyed gardening and painting birdhouses, but she would always give her birdhouses away. Neoma was a wonderful wife, Mother and Grandmother and she will be loved and remembered forever.

Memorial Contributions, in memory of Neoma, may be given to the American Cancer Society.

Friends may send online condolences to the family of Mrs. Cross at www.eatonfuneralhome.com.