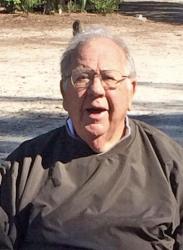 David Allan was born on September 2, 1930 to Leo H. and Katherine (Cole) Cochran in St. Joseph, MO. He attended and graduated from St. Joseph Central High School. David attended Northwest Missouri State Teachers College, receiving a Bachelor’s Degree, and later obtained a Master’s Degree from Oregon State University in 1963. He honorably served his country for two years in the Missouri National Guard, where he toured France. In June 1956, David was united in marriage to Marca Dick in Pickering, MO and one son, David Jr., was born to their union. David started his teaching career at North Kansas City High School in 1958, teaching Industrial Arts and Golf. He retired from North Kansas City High School in 1985. David and his wife relocated to Sullivan in 2002 in order to be near their son, David, Jr. David Sr. enjoyed playing golf and traveling together with Marca in the R.V.