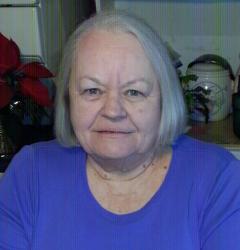 Carol Jean Pennock, age 74, of Sullivan, MO, passed away on Friday, August 31, 2018 at her home surrounded by her family.

Carol Jean was born on September 4, 1943, in Anthony, WV, to the late William Sexton and Frances Brewer. She grew up and attended school in Anthony, WV, and graduated from Frankford High School in 1961. Carol married Robert Leslie Byers on April 6, 1961. In 1964, Robert and Carol made their home in St. Louis, Missouri and moved to Sullivan in 1970. They were blessed with three daughters: Beverly, Roberta, and Renee. On December 29, 1976, Carol married Lloyd Pennock and later her fourth daughter, Crystal, was born.

Carol worked for many years in various local restaurants as a cook; she also worked as a cashier at the Bobber Cafe’.  Carol’s family was always her first priority. She had a big heart and was always helping others in need. Carol took pleasure in serving as a member of the VFW Auxiliary.  She enjoyed sewing and quilting. She had a special place in her heart for animals. She loved playing dominoes and shuffleboard with her family. Carol will be dearly missed by her family and friends.

She was preceded in death by her parents, William Sexton and Frances Brewer; grandson, Coleton William Carter; her brother Bill Sexton; and two sisters, Shirley Gross and Wilma Patterson.

Funeral Services were conducted at 2 p.m., Wednesday September 5, 2018 at the Eaton Funeral Home, with Pastor David Wright as the officiant.  Interment followed in Bourbon Cemetery.

Friends may send online condolences to the family of Ms. Pennock at www.eatonfuneralhome.com.